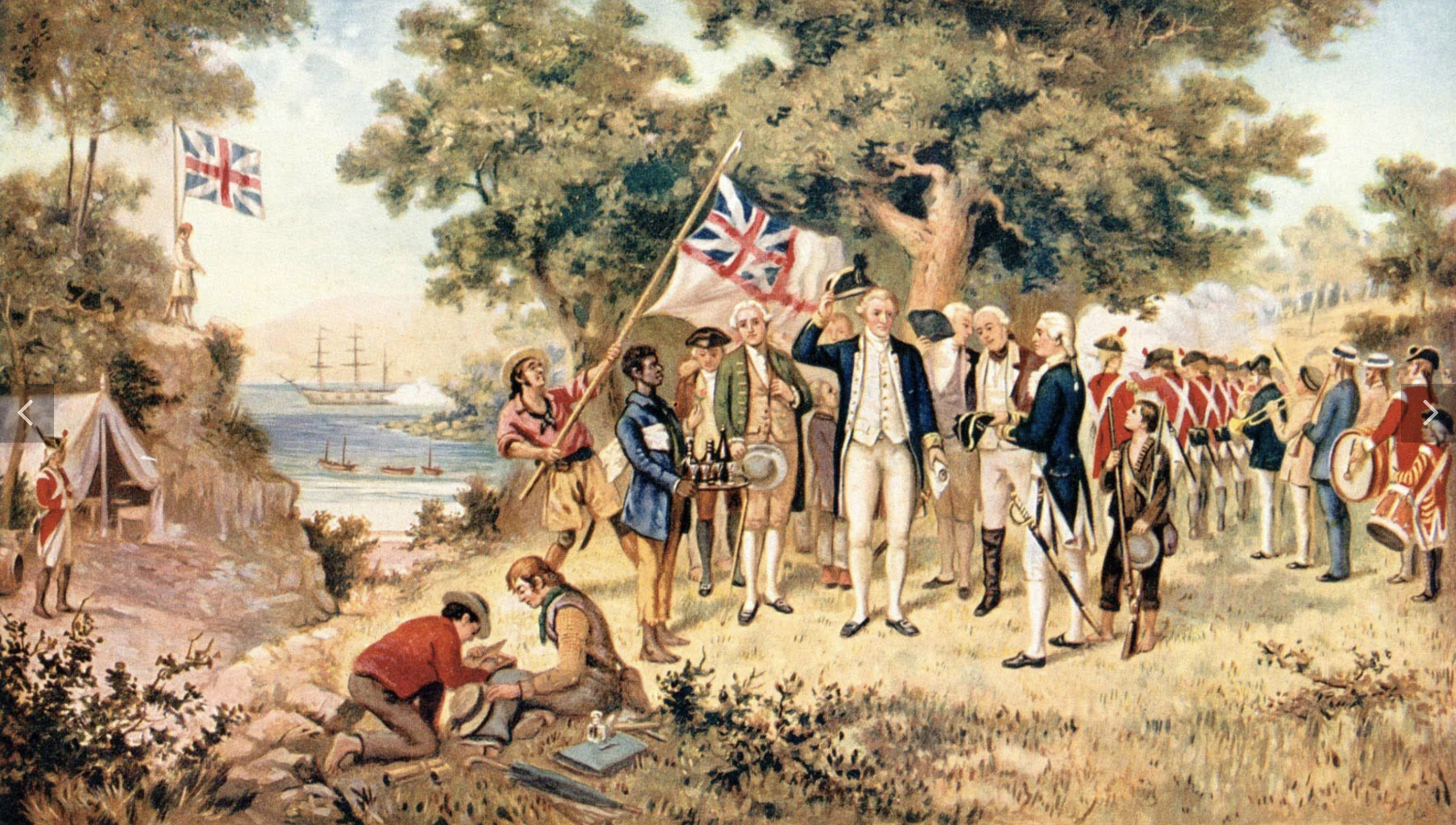 In 1823 the British Parliament passed an Act "for the better administration of Justice in New South Wales and Van Diemen’s Land, and for the effectual Government thereof; ...", in line with a general policy which had been developed allowing controlled legislatures in the British colonies.
The Act, usually called "The New South Wales Act", provided for "His Majesty to constitute and appoint a Council, to consist of such Persons resident in the said Colony, not exceeding Seven and not less than Five, as His Majesty, His Heirs and Successors, shall be pleased to appoint; ...". There was also provision for a court system and the judiciary. The members of this first Council were the Lieutenant-Governor, the Chief Justice, the Colonial Secretary, the Principal Surgeon and the Surveyor-General.

With Governor Brisbane presiding, the Legislative Council (Australia’s first Legislative body) held its first meeting at the then Government House on 25 August 1824. The first Act, a Currency Act, was passed by the Council on 28 September 1824.

A More Independent Legal System,1823-1828
The New South Wales Act of 1823 also gave the Chief Justice the right of review over legislation. No bill was to become law until the Chief Justice certified that it was not "repugnant to the Laws of England, but consistent with such Laws as far as the Circumstances of the said Colony will admit."

There is evidence to suggest that in the first half-century of the Colony, the common law was more readily accepted than the statute law, even though the local circumstances and conditions were often crying out against it. Local judges were more hesitant to accept English statutes, and a number of British Acts were judged to be inapplicable to the special circumstances of the Colony.

In 1828, the laws of England were officially "received" as the laws of New South Wales. Under the Australian Courts’ Act, passed by the Imperial Parliament, all the common laws and statutes in force in England at that date were to be applied in New South Wales whenever it was appropriate.

The Governor’s power was further eroded in 1829 following another Act of the British Parliament. The number of members of the Legislative Council was increased to a minimum of ten members and a maximum of fifteen. The balance of power was swinging towards the Council. The official members, who were members of the Executive Council, now numbered seven and there were seven non-official members.

In 1829, the Legislative Council began to hold its meetings in a room of the Surgeon’s Wing of the Sydney "Rum Hospital" in Macquarie Street. Over the next decade or so, as its need for space expanded, the Council gradually took over the entire building. This historic building, completed in 1816, remains the central element of the facade of the current Parliament House building.

Developing a Balance: Judiciary, Governor and Council, 1825-1842
The role of the Judiciary was also extended. All judges now considered bills before they were introduced in the Legislative Council. Council business became slightly more public, with proposed bills being published at least one week before being introduced in the Council. In 1832, extracts of proceedings were provided to the Press by the Clerk of the Council, but members of the Press and the public had to wait until 1838 to be admitted to Council meetings.

In 1825, instructions issued to the Governor created an Executive Council, consisting of certain officials of the colony. The Governor was directed to consult with the Council and to act on its advice - except where a need for urgent action made consultation impossible. Where the Governor did not act on the Executive Council's advice, he was required to provide his reasons to the British Secretary of State.

The Governor-in-Council, which is the official term used to describe the Governor and the Executive Council, acted as a body of appeal from the decisions of tribunals:

[Roads and Streets Act of 1833 (4 Gul. IV, No. 11)]
The Governor-in-Council granted licences, contracted with other bodies - as in the Postage Act of 1852, leased out the right to collect moneys - as in the Sufferance Wharves Act of 1846, and directed and controlled officials - as in the Prisons Regulations Act of 1840 and the Police Regulation Act of 1852.

By 1842, the population of NSW consisted of approximately 130,000 Europeans. In the period since the Legislative Council first met in 1824, free immigration had dramatically increased, as had the Australian-born population; while the convict proportion of the population had diminished to approximately 30%. Wool exports were giving the colony a sound economic base and increasing prosperity. Within NSW, popular distaste for the convict system was growing but there was still strong support for transportation from the landowners and others who benefited from the cheap - though not very efficient - labour. General discontent was growing, also, with the unrepresentative system of government. A meeting of landowner, middle class and professional men in 1835 established the Australian Patriotic Association to promote self-government, amongst other issues. Its leaders included William Charles Wentworth and James Macarthur, both great landowners with conservative liberal views, but amongst its members were also Chartists and others who argued for a very wide male franchise.

Transportation of convicts from England to New South Wales effectively ended in 1840. Many now felt that the Colony should be seen in a different light and the stigma previously attached to it as a penal colony be removed. A small but growing group of radicals and Chartists was advocating male suffrage, but for the moment landowners like William Charles Wentworth were determining the direction of change. Wentworth had been educated in England and had absorbed English liberal ideas of the time. He dreamed of transplanting the English political model to Australia, but it was a model in which voting was linked to property. He was a barrister-at-law, a newspaper editor, a person of wealth and ambition. From the early 1820s he agitated for political reforms. He was to play a leading role in the great constitutional changes of the mid-nineteenth century and came to be known as "the Father of the New South Wales Constitution".

The Constitution Act, 1842
In England in 1837-38, a House of Commons committee inquired into the effectiveness of transportation of convicts as a means of punishment and reform and came to the conclusion that the system should be ended. In October 1840, Governor Gipps announced to the Legislative Council that transportation had ceased.

Many felt that now transportation had ended, the Colony should be seen in a different light and the stigma previously attached to it as a penal colony could be removed. By 1842 the growing demands resulted in the British Parliament passing New South Wales’ first Constitution Act. It made the first significant step towards responsible government in NSW. Membership of the Legislative Council was increased to 36. The duration of each Legislative Council was to be five years from the return of the writs. Twelve members were nominated by the Crown and appointed by the Governor. Of these no more than six were to be members of the Executive Council. Two-thirds (24) of the members, including six from the Port Phillip district (later to be Victoria), were elected by landowners and householders who fulfilled the property qualifications. In 1843 the Governor ceased to be a member of the Council and one of the members was to be elected Speaker, to preside at meetings.