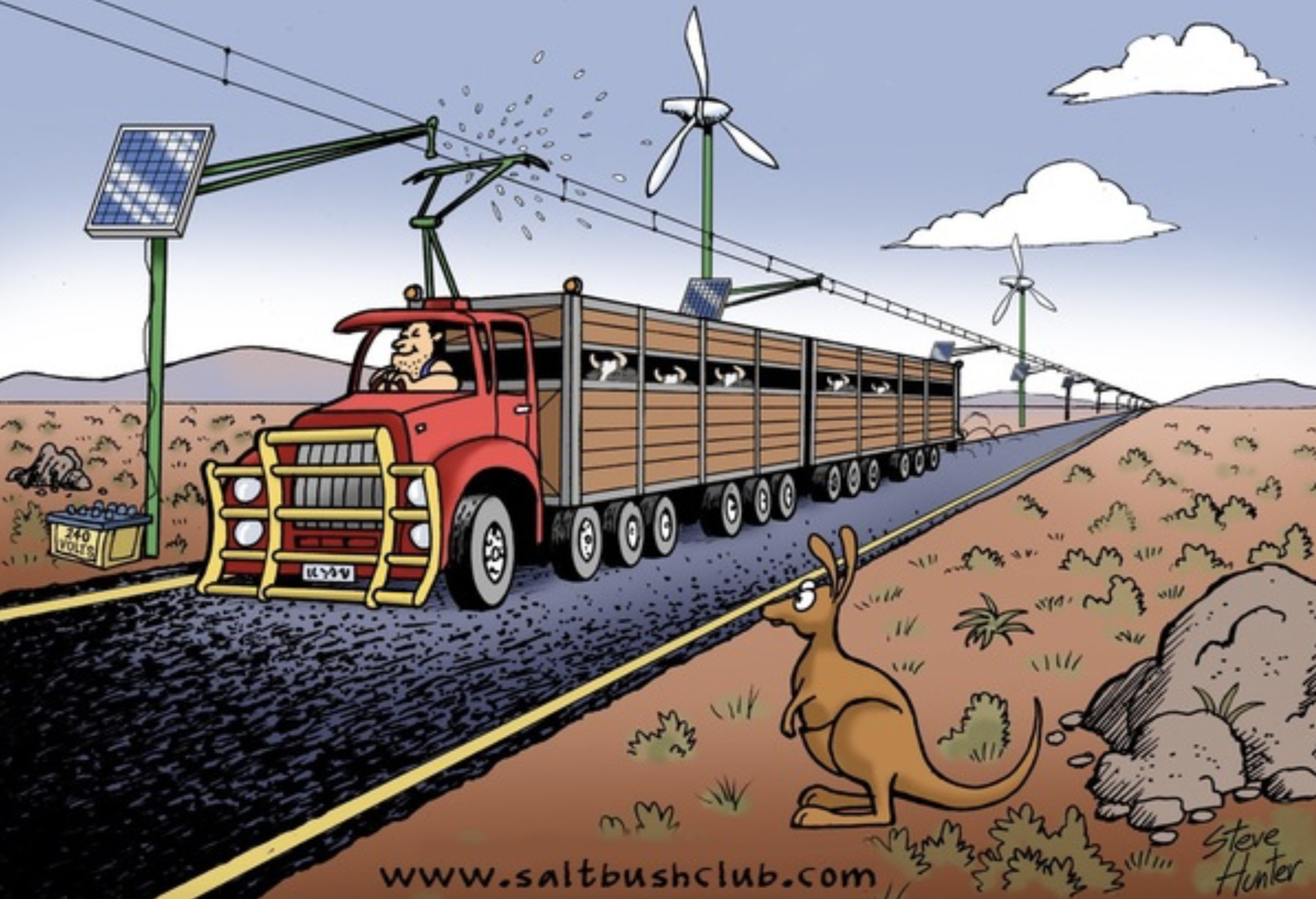 Australian prime minister Scott Morrison has had another green brainwave: spend a zillion dollars to build Australia's electric/hydrogen highway.  Naturally, this fuelish policy will be supported and accelerated by the Greens/ALP coalition.

They all need to study the history of transport in Australia.

Soon after the First Fleet landed, explorers, prospectors, and settlers headed inland seeking grasslands, timber, and minerals.  Often they followed ancient aboriginal trade routes to discover the best water holes, river crossings, and gaps in the ranges.  No governments surveyed their routes; graded their roads; or established stores of hay, grain, water and billy tea along the tracks to recharge their horses, donkeys, bullocks, passengers, and drivers.

Feeling left out of this exuberant private road creation, financed mainly by gold, copper, wool, and butter, colonial governments rushed to join the steam railway revolution then sweeping the world.  Enterprising Americans opened their Transcontinental Railway in the 1860s, crossing twelve states, with one rail gauge to link Atlantic and Pacific America.  In Australia, private companies started building lines in the 1830s, but instead of standing aside to let it happen, as America did, parochial Australian politicians and their friends saddled us with three main railway gauges: "Narrow" in Queensland, "Standard" in NSW, and "Broad" in Victoria.  All were powered by hydrocarbons: coal, wood, oil, diesel/electric, and coal-powered electric.

Then governments allowed and encouraged unions to gain control of the railways, so service declined, payrolls and costs rose, and profits evaporated.

Beside this planned chaos in Australian railways, one private entrepreneur, Freeman Cobb, established his Cobb and Co Coach Service from Melbourne to the goldfields in 1854, doing it in half the time taken by its competitors.  No bureaucrats set their routes or approved their plans.  Cobb's main plan was "Follow the Gold."  No governments established his horse-refueling stations, and no coach line ended at a state border.  By the 1870s, Cobb and Co covered over 6,850 miles of routes from Cooktown to Southern Victoria, with fresh horses and fuel for drivers, passengers, and horses every 12 miles or so.

Then the Model T Ford and the internal combustion engine ended the coach era (and the first electric car era).  No bureaucrats planned or subsidized the establishment of the refueling stations for the gas-driven cars, utilities, trucks, and tractors that followed the Model T.

Meanwhile, Australian drovers moved stock up and down the great stock routes, trying to follow the storms that refreshed their grass-powered refueling stations.  No bureaucrat planned their business.

But slowly, without political plans or subsidies, diesel trucks and road trains replaced most drovers by providing a quicker service less dependent on the weather.  Cities grew as food supplies improved.

But today's politicians want to force an electric/hydrogen road revolution, casually brushing aside questions as to who will establish the charging-fueling stations and where the reliable energy will come from when diesel, gas, and coal are heavily taxed and nuclear energy is banned.

Here is an Australian Cattle Train of the future:

Electric cars should reduce suburban noise and improve city air quality, but users should fund their own recharging centers, and all road users should contribute fairly to the costs of road building and maintenance.

But a political rush job to abandon coal and petroleum fuels, together with all their engines, generators, and supply chains, would be a mammoth and high-risk undertaking.  To combine this with the task of planning, funding, and building a new transport network based on intermittent green energy, electric engines, batteries, and hydrogen is just green fantasy.

This LNP dreamtime electric/hydrogen highway is destined to become the largest ever green flop in our net-zero era.  Its foolishness and waste will far exceed the colonial rail gauge mess, the subsidized wind/solar mania, and the ALP pink batts scheme.

And if the ALP/Green Coalition wins the next election, this energy disaster will visit us sooner.