HISTORICAL NOTE.—At the Melbourne Session of the Convention, after the first report, this clause was proposed by Mr. O'Connor in precisely the form in which it now stands. (Conv. Deb., Melb., pp. 1,826-7.)

This is an Act to provide, in certain cases, for the alteration of the boundaries of self-governing colonies. It provides as follows:—

(ii.) Provided that the consent of a self-governing colony shall be required for the alteration of the boundaries thereof.

(iii.) In this Act “self-governing colony” means any of the colonies specified in the schedule to this Act.

The effect of this clause is to make the Colonial Boundaries Act apply, not to the separate States of the Commonwealth, but to the Commonwealth as a whole—just as it applies to the Dominion of Canada as a whole. In other words, the colonies which become States are in effect struck out of the schedule, and the Commonwealth of Australia is substituted.

The purpose of the Act is to confer general statutory authority on the Queen to alter the boundaries of a self-governing colony, with the consent of that colony, without the necessity of resorting to Imperial legislation in every case.

The reason for repealing the Act, so far as it applied to colonies which become States of the Commonwealth, is that the Constitution itself makes provision for the alteration of the boundaries of States. Sec. 123 provides that the Parliament of the Commonwealth may, with the consent of the Parliament of a State, and the approval of a majority of voters in the State, alter the limits of the State.

Below is a legal advice given to the Prime Minister on the subject of the Colonial Boundaries Act 1895. Isaac Isaacs at age 75 was the first native-born Australian and the only Chief Justice of the High Court ever appointed to the role, and the first Governor-General in the Commonwealth, there is no mention of State Borders. 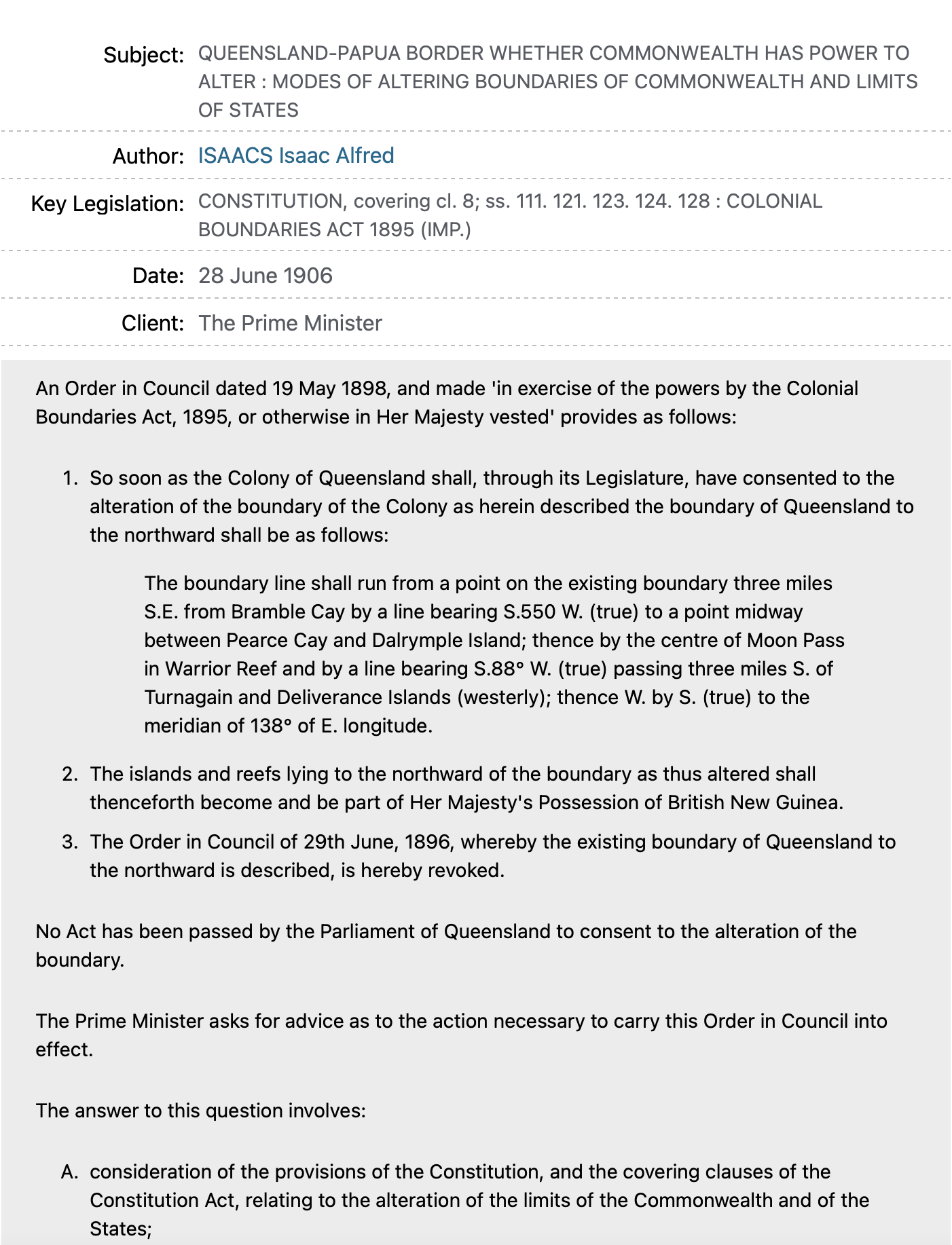 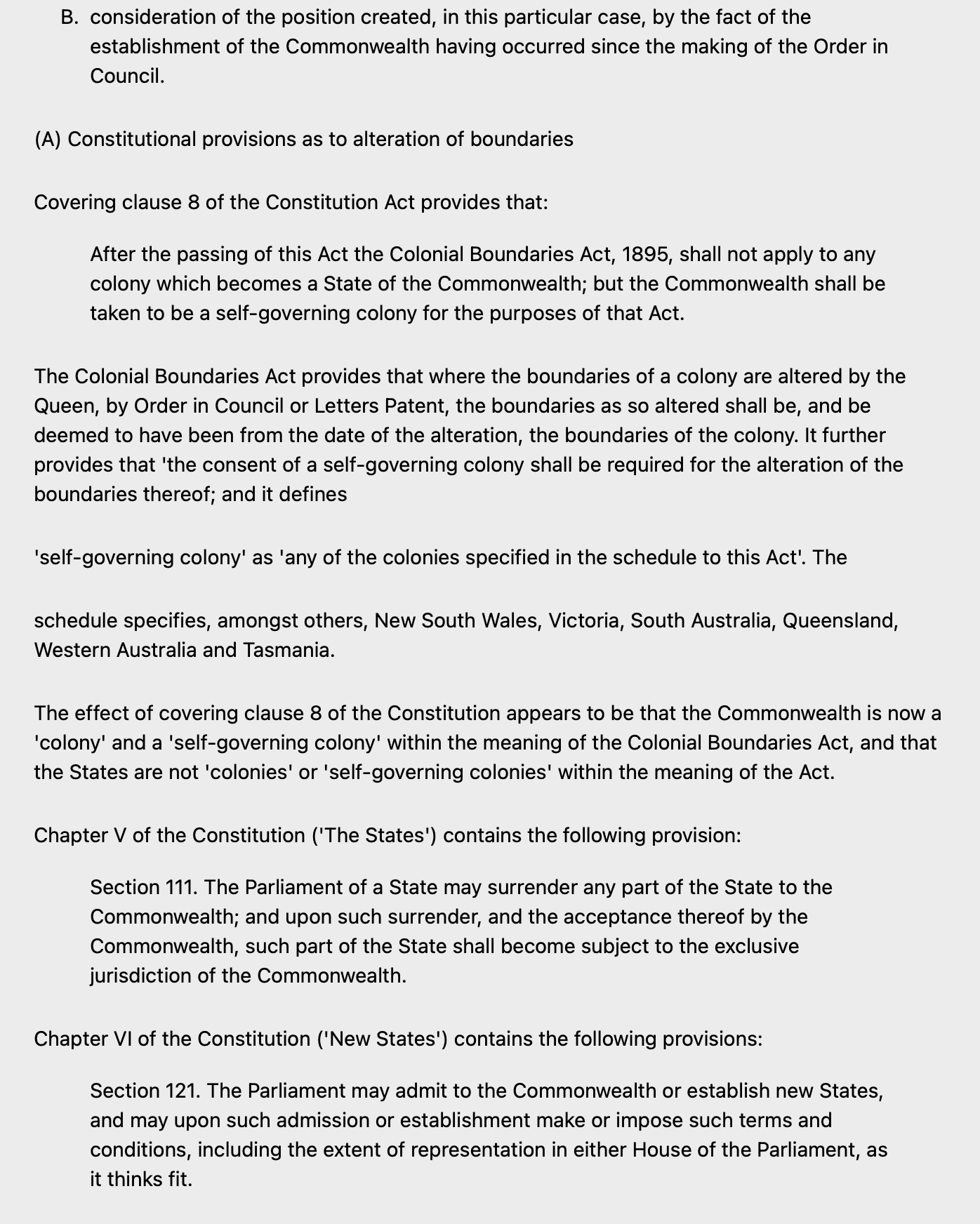 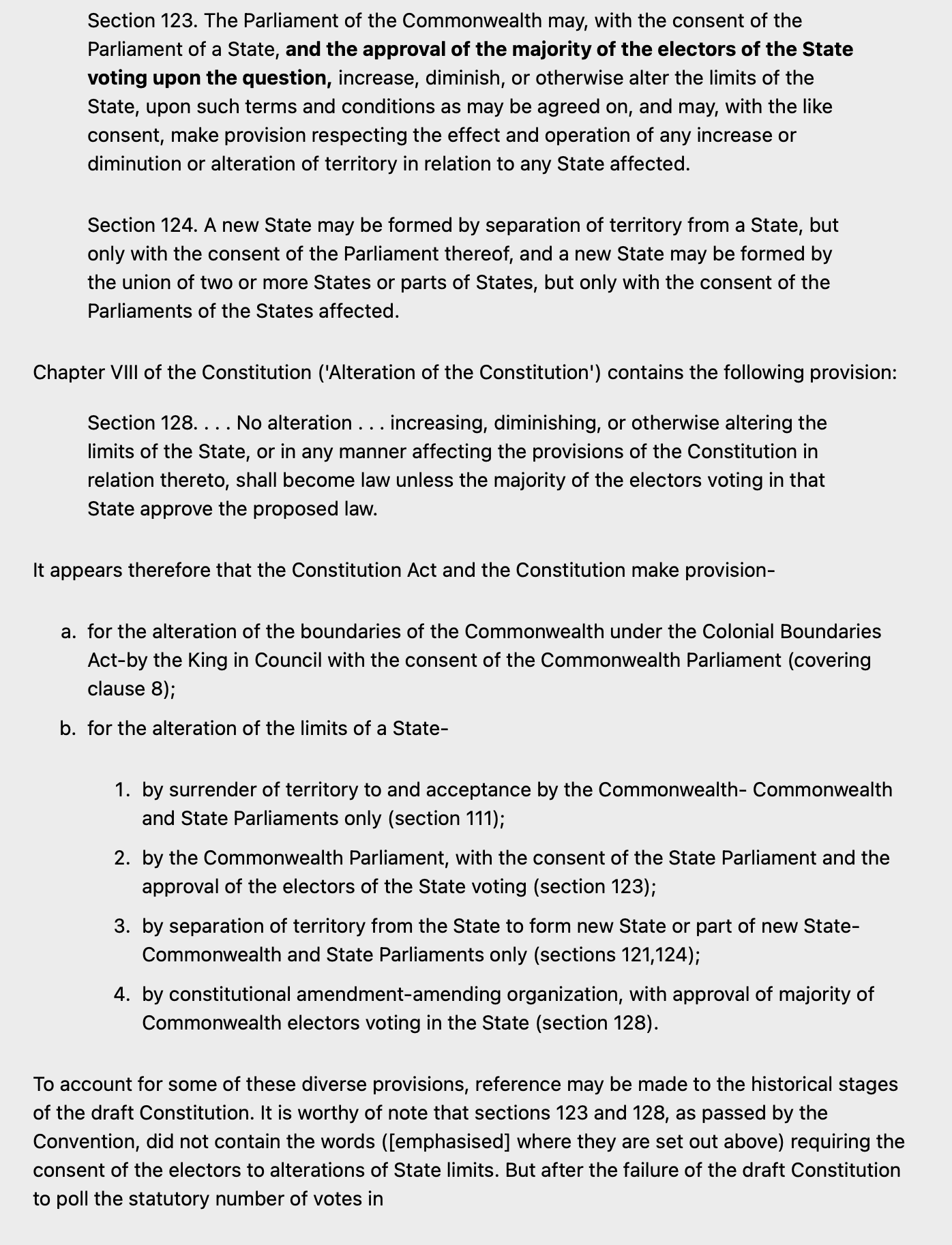 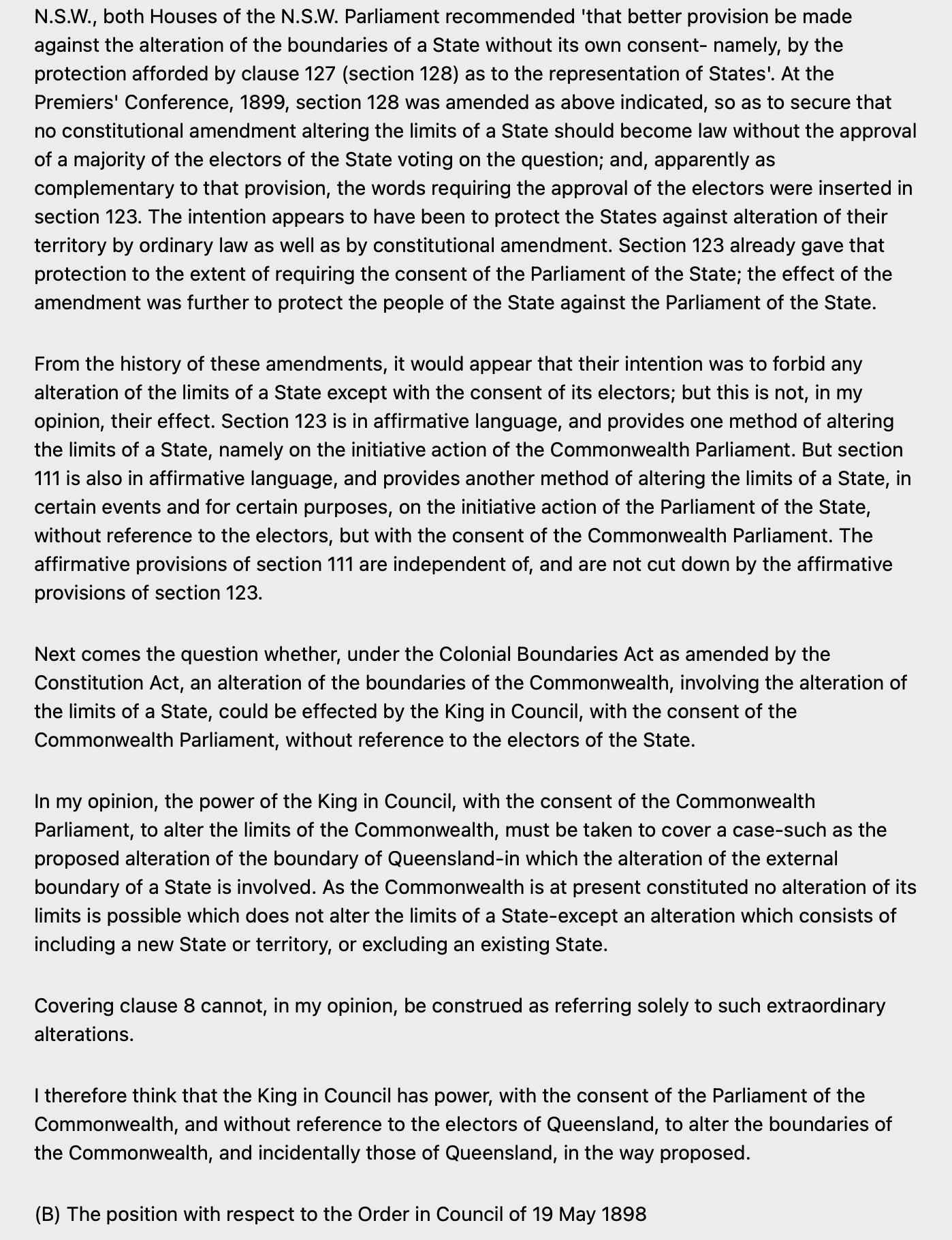 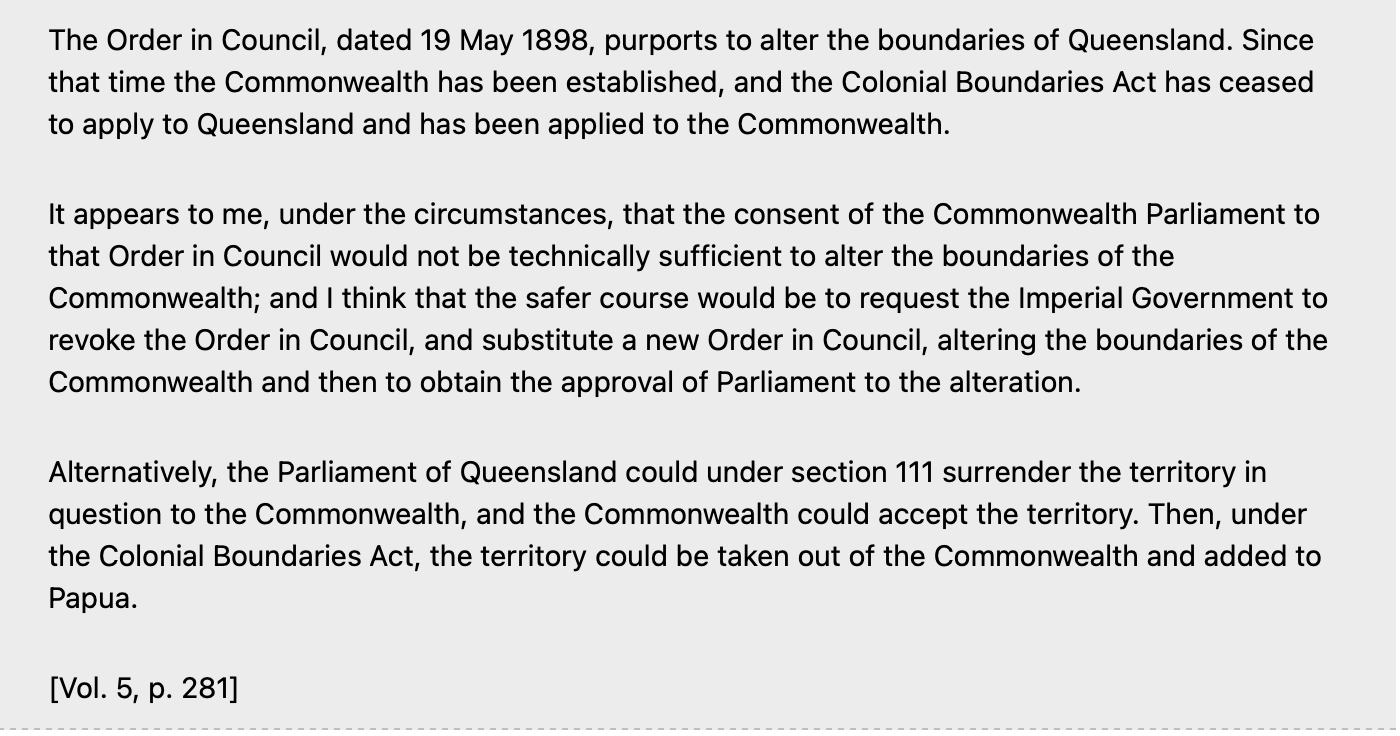 34. There is another consideration which to my mind is significant. The Colonial Boundaries Act and, more importantly,    s. 123 of the Constitution assume that the boundaries of the Australian colonies and subsequently of the States are fixed boundaries capable of alteration only in the manner prescribed.

The matters listed below may be thought to represent the last remaining colonial links between Australia and the United Kingdom.

Application of (Imp.) Colonial Boundaries Act 1895 under which Australian boundaries may be altered by The Queen by Order in Council (i.e. The Queen acting with the advice of the Privy Council).