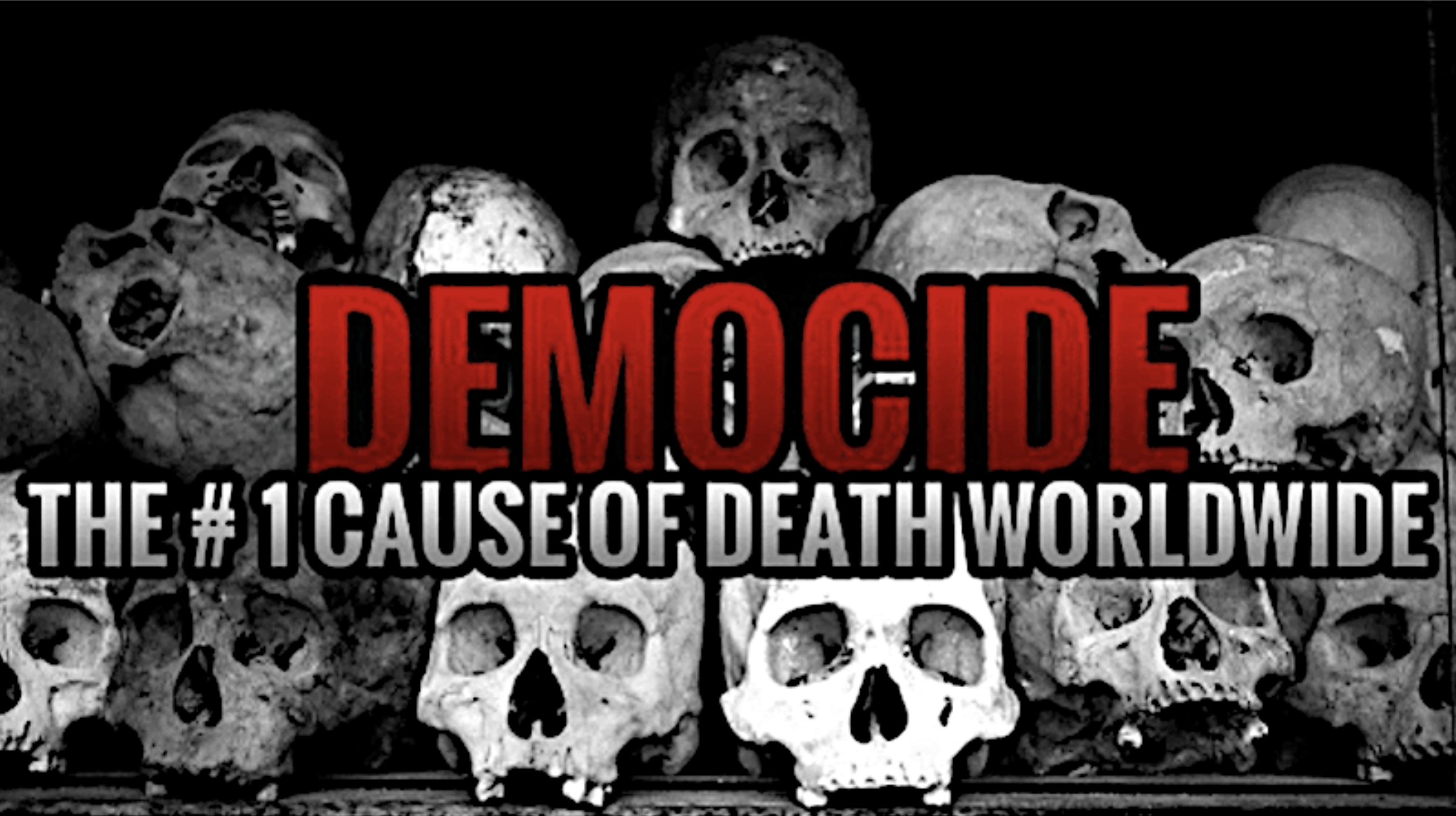 Democide is a concept proposed by U.S. political scientist Rudolph Rummel to describe "the intentional killing of an unarmed or disarmed person by government agents acting in their authoritative capacity and pursuant to government policy or high command."According to Rummel, this definition covers a wide range of deaths, including forced labor and concentration camp victims; killings by unofficial private groups; extrajudicial summary killings; and mass deaths due to governmental acts of criminal omission and neglect such as in deliberate famines as well as killings by de facto governments, i.e. civil war killings. This definition covers any murder of any number of persons by any government.

Rummel created the term democide as an extended concept to include forms of government murder not covered by the term genocide. According to Rummel, democide surpassed war as the leading cause of non-natural death in the 20th century.

Democide is the murder of any person or people by their government, including genocide, politicide and mass murder. Democide is not necessarily the elimination of entire cultural groups but rather groups within the country that the government feels need to be eradicated for political reasons and due to claimed future threats.

According to Rummel, genocide has three different meanings. The ordinary meaning is murder by government of people due to their national, ethnic, racial or religious group membership. The legal meaning of genocide refers to the international treaty on genocide, the Convention on the Prevention and Punishment of the Crime of Genocide. This also includes nonlethal acts that in the end eliminate or greatly hinder the group. Looking back on history, one can see the different variations of democides that have occurred, but it still consists of acts of killing or mass murder. The generalized meaning of genocide is similar to the ordinary meaning but also includes government killings of political opponents or otherwise intentional murder. In order to avoid confusion over which meaning is intended, Rummel created the term democide for this third meaning.

In "How Many Did Communist Regimes Murder?", Rummel wrote:

First, however, I should clarify the term democide. It means for governments what murder means for an individual under municipal law. It is the premeditated killing of a person in cold blood, or causing the death of a person through reckless and wanton disregard for their life. Thus, a government incarcerating people in a prison under such deadly conditions that they die in a few years is murder by the state--democide--as would parents letting a child die from malnutrition and exposure be murder. So would government forced labor that kills a person within months or a couple of years be murder. So would government created famines that then are ignored or knowingly aggravated by government action be murder of those who starve to death. And obviously, extrajudicial executions, death by torture, government massacres, and all genocidal killing be murder. However, judicial executions for crimes that internationally would be considered capital offenses, such as for murder or treason (as long as it is clear that these are not fabricated for the purpose of executing the accused, as in communist show trials), are not democide. Nor is democide the killing of enemy soldiers in combat or of armed rebels, nor of noncombatants as a result of military action against military targets.

In his estimates, Rudolph Rummel relied mostly on historical accounts, an approach that rarely provides accuracy compared with contemporary academic opinion. In the case of Mexican democide, Rummel wrote "these figures amount to little more than informed guesses", but he thought that "there is enough evidence to at least indict these authoritarian regimes for megamurder."In response to David Stannard's figures about what he terms "the American Holocaust", Rummel estimated that over the centuries of European colonization about 2 million to 15 million American indigenous people were victims of democide, excluding military battles and unintentional deaths in Rummel's definition. Rummel wrote that "[e]ven if these figures are remotely true, then this still make this subjugation of the Americas one of the bloodier, centuries long, democides in world history."

Rummel's estimates, especially about Communist democide, typically included a wide range and cannot be considered determinative. Rummel calculated nearly 43 million deaths due to democide inside and outside the Soviet Union during Stalin's regime. This is much higher than an often quoted figure of 20 million, or a more recent figure of 9 million. Rummel responded that the 20 million estimate is based on a figure from Robert Conquest's The Great Terror and that Conquest's qualifier "almost certainly too low" is usually forgotten. For Rummell, Conquest's calculations excluded camp deaths before 1936 and after 1950, executions (1939–1953), the population transfer in the Soviet Union (1939–1953), the deportation within the Soviet Union of minorities (1941–1944) and those the Soviet Red Army and secret police executed throughout Eastern Europe after their conquest during the 1944–1945 period. Moreover, the Holodomor that killed 5 million in 1932–1934 (according to Rummel) is also not included. According to Rummel, forced labor, executions and concentration camps were responsible for over one million deaths in the Democratic People's Republic of Korea from 1948 to 1987.

According to Rummel, his research showed that the death toll from democide is far greater than the death toll from war. After studying over 8,000 reports of government-caused deaths, Rummel estimated that there have been 262 million victims of democide in the last century. According to his figures, six times as many people have died from the actions of people working for governments than have died in battle. One of his main findings was that liberal democracies have much less democide than authoritarian regimes. Rummel argued that there is a relation between political power and democide. Political mass murder grows increasingly common as political power becomes unconstrained. At the other end of the scale, where power is diffuse, checked, and balanced, political violence is a rarity. According to Rummel, "[t]he more power a regime has, the more likely people will be killed. This is a major reason for promoting freedom. "Rummel argued that "concentrated political power is the most dangerous thing on earth."

Several other researchers have found similar results to Rummel's, with one noting that "[n]umerous researchers point out that democratic norms and political structures constrain elite decisions about the use of repression against their citizens whereas autocratic elites are not so constrained. Once in place, democratic institutions—even partial ones—reduce the likelihood of armed conflict and all but eliminate the risk that it will lead to geno/politicide."Researchers often give widely different estimates of mass killings or mass murders. They use different definitions, methodology and sources, with some including battle deaths in their calculations. Klas-Göran Karlsson prefers using the term crimes against humanityto include "the direct mass killings of politically undesirable elements, as well as forced deportations and forced labour." Karlsson acknowledges that the term may be misleading in the sense that the Communist regimes targeted groups of their own citizens, but he considers it useful as a broad legal term which emphasizes attacks on civilian populations and because the offenses demean humanity as a whole. Michael Mann and Jacques Sémelin believe that crimes against humanity is more appropriate than genocide or politicide when speaking of killings or violence by Communist regimes.

The concept has been applied to Communist states. According to Klas-Göran Karlsson, discussion of killings by Communist states has been "extremely extensive and ideologically biased. "Any attempt to estimate a total number of killings by Communist states depends greatly on definitions, ranging from a low of 10–20 millions to as high as 110 millions. Nonetheless, attempts at documenting and estimating killings by Communist states have been made by several authors, scholars and anti-communist organizations. In 1994, Rudolph Rummel's book Death by Government included about 110 million people, foreign and domestic, killed by Communist democide from 1900 to 1987.In 1993, Rummel wrote: "Even were we to have total access to all communist archives we still would not be able to calculate precisely how many the communists murdered. Consider that even in spite of the archival statistics and detailed reports of survivors, the best experts still disagree by over 40 percent on the total number of Jews killed by the Nazis. We cannot expect near this accuracy for the victims of communism. We can, however, get a probable order of magnitude and a relative approximation of these deaths within a most likely range." Due to additional information about Mao Zedong's culpability in the Great Chinese Famine according to Mao: The Unknown Story, a 2005 book authored by Jon Halliday and Jung Chang, Rummel revised upward his total for Communist democide to about 148 million, using their estimate of 38 million famine deaths.

In 1999, Stéphane Courtois's introduction to The Black Book of Communism gave a "rough approximation, based on unofficial estimates" approaching 100 million killed. In his foreword to the book, Martin Malia wrote that "a grand total of victims variously estimated by contributors to the volume at between 85 million and 100 million." In 2005, Benjamin Valentino stated that Communist democide in the Soviet Union, People's Republic of China and Cambodia alone ranged from a low of 21 million to a high of 70 million. Citing Rummel and others, Valentino stated that the "highest end of the plausible range of deaths attributed to communist regimes" was "up to 110 million." In 2010, Steven Rosefielde's book Red Holocaust argued that Communism's internal contradictions caused the democide of "approximately 60 million people and perhaps tens of millions more." In 2011, Matthew White published his rough total of Communist democide at 70 million, including "people who died under communist regimes from execution, labor camps, famine, ethnic cleansing, and desperate flight in leaky boats", with 26 million people additionally dying in "Communist-inspired wars." In 2014, Julia Strauss wrote that while there was the beginning of a scholarly consensus on figures of around 20 million killed in the Soviet Union and 2–3 million in Cambodia, there was no such consensus on numbers for China. In 2017, Stephen Kotkin wrote in The Wall Street Journal that Communist democide resulted in at least 65 million people between 1917 and 2017, stating: "Though communism has killed huge numbers of people intentionally, even more of its victims have died from starvation as a result of its cruel projects of social engineering."

The criticism of some of the estimates, especially those of Rummel and The Black Book of Communism which made use of Rummel's estimates and analysis, are mostly focused on three aspects, namely that the estimates were based on sparse and incomplete data when significant errors are inevitable; that the figures were skewed to higher possible values; and that those dying at war and victims of civil wars, Holodomor and other famines under Communist governments should not be counted. According to Anton Weiss-Wendt, any attempts to develop a universally-accepted terminology describing mass killings of non-combatants, especially those under Communist regimes, defined as any death by democides, famines and wars, was a complete failure. Weiss-Wendt wrote that the field of comparative genocide studies has very "little consensus on defining principles such as definition of genocide, typology, application of a comparative method, and timeframe."