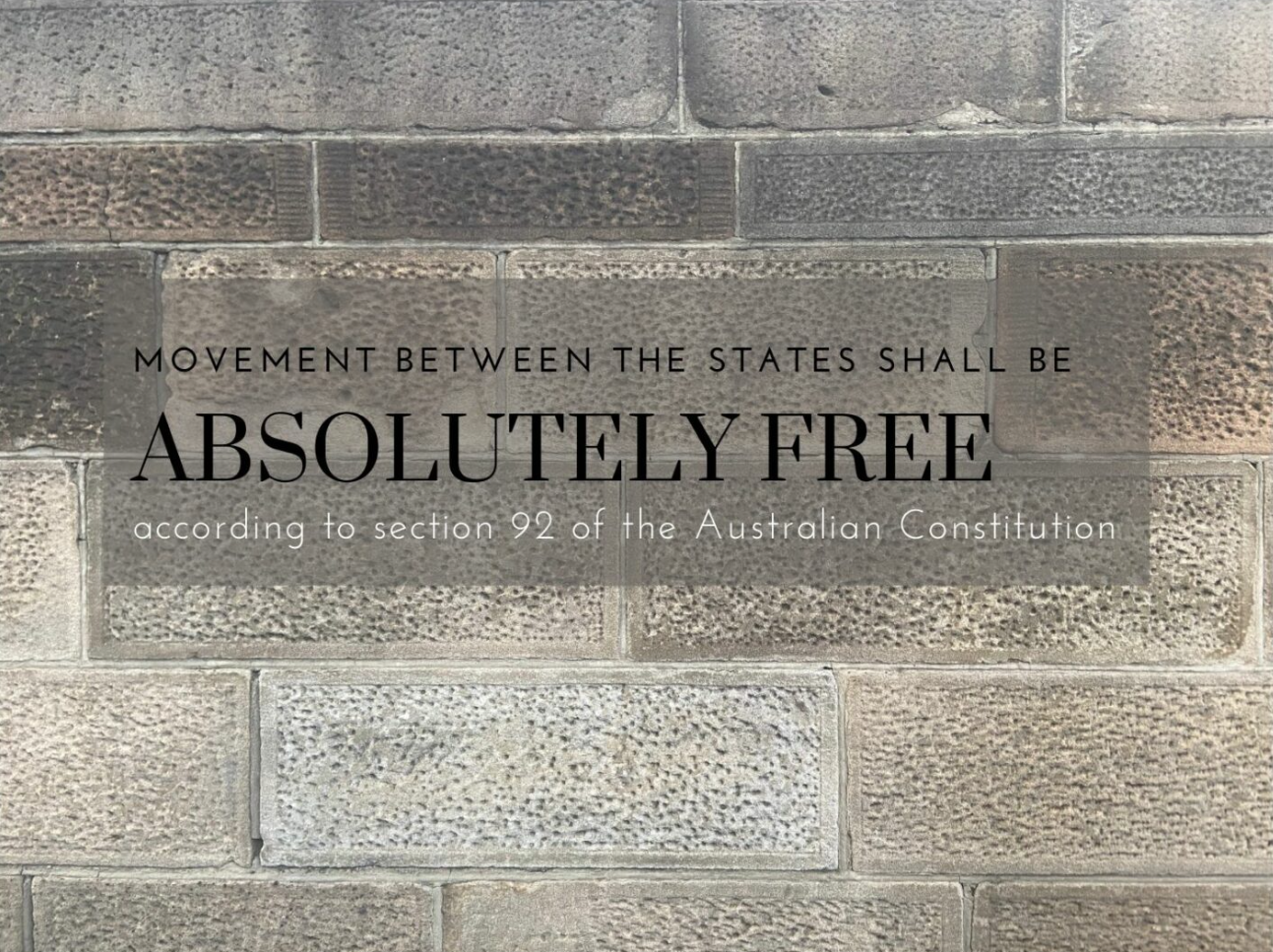 Home »Commonwealth»Is Section 92 of the Constitution a Personal Right? (1)

Can the States legislate to stop you crossing, independently the State Boundaries by exercising your personal right to do so guaranteed by the constitution? We then explore Cole v Whitfield in the journey of understanding of what section 92 brings to the individual

BANK OF N.S.W. v. THE COMMONWEALTH

47. It is now settled, I think, after some fluctuation in opinion, that s. 92 is an inhibition addressed to the Parliaments of the Commonwealth and the States preventing them from legislating so as to interfere with the freedom prescribed by the section. It gives no rights to the citizens of the Commonwealth except the right to ignore and if necessary to procure the assistance of the judicial power in resisting any such legislation (James v. South Australia (1927) 40 CLR 1, at p 31 ; James v. The Commonwealth (1939) 62 CLR 339, at pp 361, 362 ; James v. The Commonwealth (1936) AC 578; 55 CLR 1 ). Still the freedom is not limited "to freedom from legislative control; it must equally include executive control" (James v. The Commonwealth (1936) AC 578, at p 628; 55 CLR, at p 56 ). But, doubtless, the expression trade, commerce and intercourse "describes the activities of individuals. The object of s. 92 is to enable individuals to conduct their commercial dealings and their personal intercourse with one another independently of State boundaries" (O. Gilpin Ltd. v. Commissioner for Road Transport and Tramways (N.S.W.) (1935) 52 CLR 189, at p 211 ). It was said, however, that s. 92 relates only to the passage of goods or visible tangible things and persons across the borders of the States and is wholly inapplicable to intangible things or commercial intercourse across State borders. And it was claimed that the addition of the words "whether by means of internal carriage or ocean navigation" in s. 92 supported this view. And so, also, it was claimed that the opinion of the Judicial Committee in James v. The Commonwealth (1936) AC 578; 55 CLR 1 was based upon this assumption. (at p305)

“After a long series of cases failed satisfactorily to resolve the meaning of this provision, the HCA, in a rare unanimous judgment, revised the law radically following a careful historical analysis of the framers’ intentions and understandings of the free trade principle.” “Particularly prominent example of this historical method, but the method is well- established. However, this use of historical method does not amount to a full-blown commitment to ‘originalism’ in constitutional interpretation. Most members of the Court have been clear that the Constitution’s meaning changes over time and that its ‘original meaning’ may not govern the present.”

“Moreover, there is some disagreement about the precise uses to which history is put. While historical material may be used as evidence of the intention of its framers on some occasions it is used it in other ways: to identify the historical understanding of the text at the time of its drafting (a separate idea from the framers’ intention) or to identify historical practices that inform the meaning of the Constitution.” The departure from individual rights to a law offends s 92 if it imposes ‘discriminatory burdens of a protectionist kind’ or if its effect is ‘discriminatory against interstate trade and commerce in that protectionist sense’ or ‘if its effect is discriminatory and the discrimination is upon protectionist grounds’