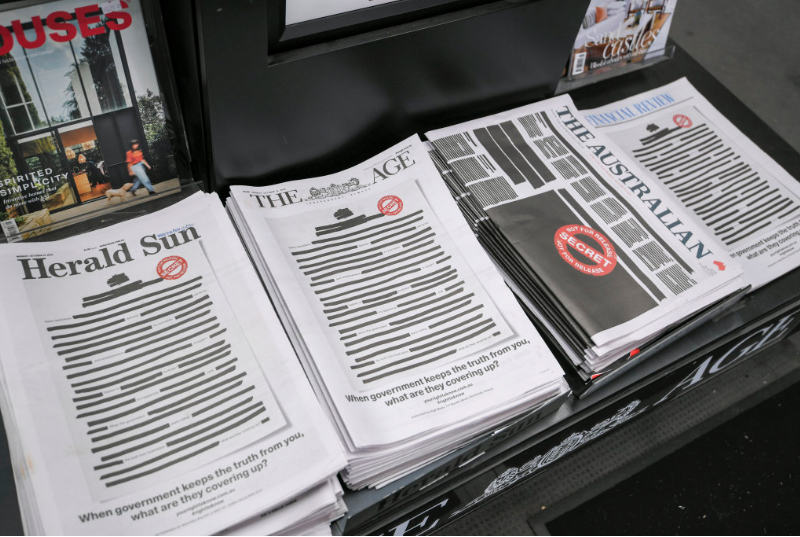 Home »Media»‘A culture of secrecy’: what is the Right to Know campaign about?

All of Australia’s major media organisations have joined forces to call for reforms to protect public interest journalism in Australia. Australia’s Right to Know coalition includes Nine, News Corp, the ABC, SBS, The Guardian, and journalists’ union the Media, Entertainment and Arts Alliance.

The campaign, an unprecedented show of unity between competitors, is pushing for stronger protections for media freedom after years of perceived deterioration. The outlets are seeking to combat a growing culture of secrecy that restricts journalists’ ability to hold the powerful to account.

Did anything, in particular, spark this?

Media organisations in Australia have long been concerned about threats to journalism, but the issue exploded into the public consciousness following two consecutive police raids earlier this year.

On June 4, police conducted a six-hour raid on the home of News Corp political journalist Annika Smethurst over an April 2018 story. The story had revealed a proposal for electronic intelligence agency the Australian Signals Directorate to take on an expanded domestic role and that figures inside government were concerned about the idea.

On June 5, as part of a separate leak investigation, police raided the Sydney headquarters of the ABC over a 2017 series on accusations of war crimes committed by Australia’s special forces in Afghanistan. The warrant named multiple ABC journalists responsible for the reporting. A week earlier, a former military lawyer was committed to stand trial over the leak of documents to the ABC.

A further raid on News Corp was planned for June 6 but did not go ahead. The back-to-back operations, taking place long after the publication of the stories, triggered concerns that police were seeking to intimidate whistleblowers and journalists. The police actions highlighted a perceived rise of cultural secrecy and legal restrictions that impinge on media freedom in Australia.

What was the government’s response?

Prime Minister Scott Morrison and senior colleagues defended the police raids as the independent actions of an agency doing its job to protect national security. They have responded to the broader furore over press freedom by calling a parliamentary inquiry and issuing directives to agencies emphasising the importance of a free press.

The inquiry, conducted by the intelligence and security committee, is examining the impact of national security laws on press freedom. This inquiry has heard from media outlets, government officials and independent experts. It is being conducted alongside a more wide-ranging press freedom inquiry by a Senate committee.

Officials, including senior figures at the Australian Security Intelligence Organisation and the Department of Home Affairs, have defended the need for a high level of secrecy, criticised media coverage and argued that some of the recommendations put forward by media organisations would threaten national security. Ministers and officials have declined to rule out pursuing charges against the News Corp and ABC journalists targeted in the raids.

Home Affairs Minister Peter Dutton has issued a directive to the federal police stating they should consider the “importance of a free and open press” and broader public-interest implications before involving media outlets in investigations. Attorney-General Christian Porter also instructed Commonwealth prosecutors not to charge journalists under certain secrecy laws without his approval. Porter has said he would be “seriously disinclined” to authorise the prosecutions.

Privately, the Morrison government has indicated a scepticism that media freedom is something that grabs the public’s attention. There is also hostility within the Coalition towards any changes seen as weakening national security. With these political and policy factors in mind, the government does not yet seem convinced of the need for sweeping law reform.

'Right to Know' not just for journalists

What do the media companies want to achieve?

Australia’s Right to Know coalition has six key proposals for “necessary and urgent” reform. The changes would strengthen rights and protections for public-interest journalism.

What's the experience of The Sydney Morning Herald and The Age?

The Sydney Morning Herald and The Age, formerly owned by Fairfax Media and now Nine, have a long history of significant investigative journalism. This work has regularly come into conflict with the authorities, and journalists have faced police raids, punishment of whistleblowers and restrictive FOI processes.

In 2010, The Age revealed that the Victorian Labor Party held sensitive personal information about voters without their knowledge. This reporting was based on information from the party’s database, which the reporters had accessed. Victorian police later obtained warrants to search the journalists’ digital and hard copy files. If The Age had the ability to challenge the warrants, the lawyers may have been able to restrict police access to the reporters’ computers.

In April 2012, investigative journalist Chris Vedelago submitted a FOI request to the Foreign Investment Review Board for documents relating to the approval of the sale of a vast tract of agricultural land to a Canadian company. The board rejected the request as not in the public interest. Vedelago appealed the decision to the independent information commissioner, who didn’t make a decision until November 2014. The documents that were ultimately released were of little value because so much information was redacted.

In 2018, a joint investigation by Fairfax Media and the ABC’s Four Cornersuncovered the Australian Taxation Office’s mistreatment of taxpayers. The information was revealed by ATO whistleblower Richard Boyle. He has now been charged with 66 offences and faces 161 years in prison.

Isn’t this a case of media self-interest? Why should I care?

Publishers and broadcasters have been at pains to emphasise that protections for media freedom are about the health of democracy. They argue that members of the public have a right to know about the conduct of those in power, with this transparency and accountability critical to the functioning of a free and functional society.

When sources are too scared to come forward

Research conducted by the media companies found 87 per cent of people believe it’s important for Australia to be a free and open democracy. Only 37 per cent think this describes the status quo. A majority of survey respondents also agreed the government had become less transparent, whistleblowing was important and should be protected, and journalists should be protected from prosecution.

A key concern in the discussion is also whistleblower protections to ensure that any individual has the ability to approach media outlets with information they believe should be aired publicly.

So you’re saying journalists should be above the law?

The reform proposals put forward by the media outlets have been met with scepticism from some in Parliament and the community who have questioned why journalists should receive special treatment. In response, media outlets have argued that protections for journalists do not make them above the law. They say there are many nuances in the legal system, pointing to examples such as parliamentary privilege and the confidentiality between a doctor and their patient. According to the coalition of media organisations, the balance is wrong and the law should be changed to plug gaps and protect public-interest journalism.

How does Australia compare internationally?

Reporters Without Borders ranked Australia as 21st in the world for press freedom in 2019, dropping two places since last year. The international organisation has warned that investigative journalism is under threat from “draconian” laws. Another global watchdog, Freedom House, has warned of a troubling trend in Australia despite a strong democratic history.

Australia’s protections for press freedom are weaker than other Western democracies. The United States constitution enshrines free speech and a free press. In Britain, human rights legislation explicitly protects freedom of expression. Both countries also have stronger protections for journalists facing defamation actions. Australia has no strong legal protections for journalism and free expression, making it unique among comparable countries. The defences available in defamation law are also considered to be weak and complex, with Australia attracting a reputation as the defamation capital of the world.

Constitutional lawyer George Williams has pointed to the approximately 75 rounds of national security legislation that have been passed by the Parliament since September 11, 2001. He says the scale of this legislation far exceeds comparable democracies and have significantly heightened secrecy and restrictions on press freedom.

How can you support the campaign?

Write to your local MP and make your voice heard. Tell the government that you have a right to know, and that you are joining the call for reforms to legislation to protect media freedom in Australia.